I am new to the collective and merely a mostly mycology, but very recently myxomycetes, hobbyist. I made a very light hobby for a long while of identifying mushrooms, but in the last six months I've started to try and dive a little deeper into things. That's how I discovered myxomycetes and slime molds - found my first M.vesparium while looking inexplicably closely at a random log and it piqued my interest. Now, I've read a VERY introductory book, - The Myxomycetes Handbook of Slime Molds - and went ahead and started a few random moist chambers with local tree bark.

Which leads me to my current quandary - having grown a slime mold I am woefully incapable of identifying. Here's the details. I apologize in advance, these photos are not great. I bought a decent, but introductory, dissecting microscope and have only a 3MP AMSCOPE microscope camera to take photos with. These are all stacks of numerous shots, but I just could not get this combination of scope and camera to produce more detail. I am determined, however, to get a great macro photo rig in the near future, cause some of the photos I see on here are amazing.

Anyway, the bark was from a Sycamore tree in New York City - just a street tree - and it was harvested three or so weeks ago. After a week or so it started to sprout a white fuzz, and I was immediately confused, as that did not meet the description for plasmodium I had expected. Today there are only a few areas of fuzz left, but the whole piece of wood was covered in this stuff. Then when the fuzz mostly disappeared, I scanned the surface with a hand lens and saw that it had in fact sprouted a number of structures. 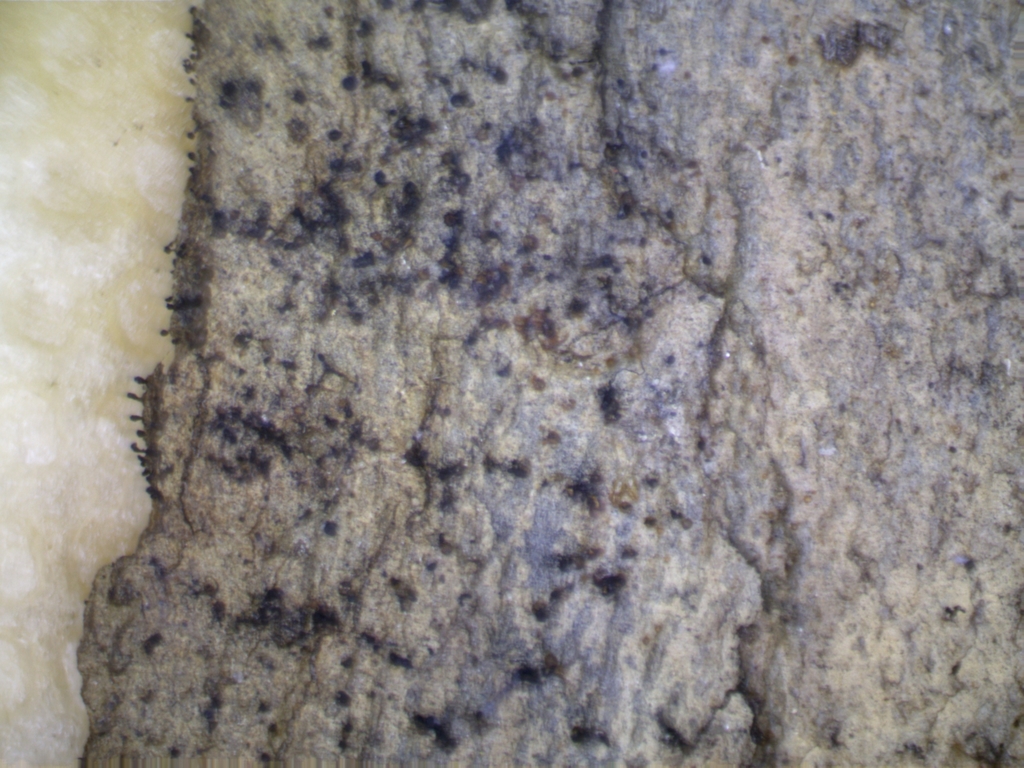 I just went through and took as detailed a series of photos as I could. Given the quality, I'm sad to say it took over four hours to get these results - but as a very first effort using a dissecting scope and stacking software, I'm not totally disappointed. Unfortunately, my little handbook provided no clarity in trying to identify these weird, blackberry things. I'm not even sure if they are fully matured slime molds, or some aborted version of a larger species. 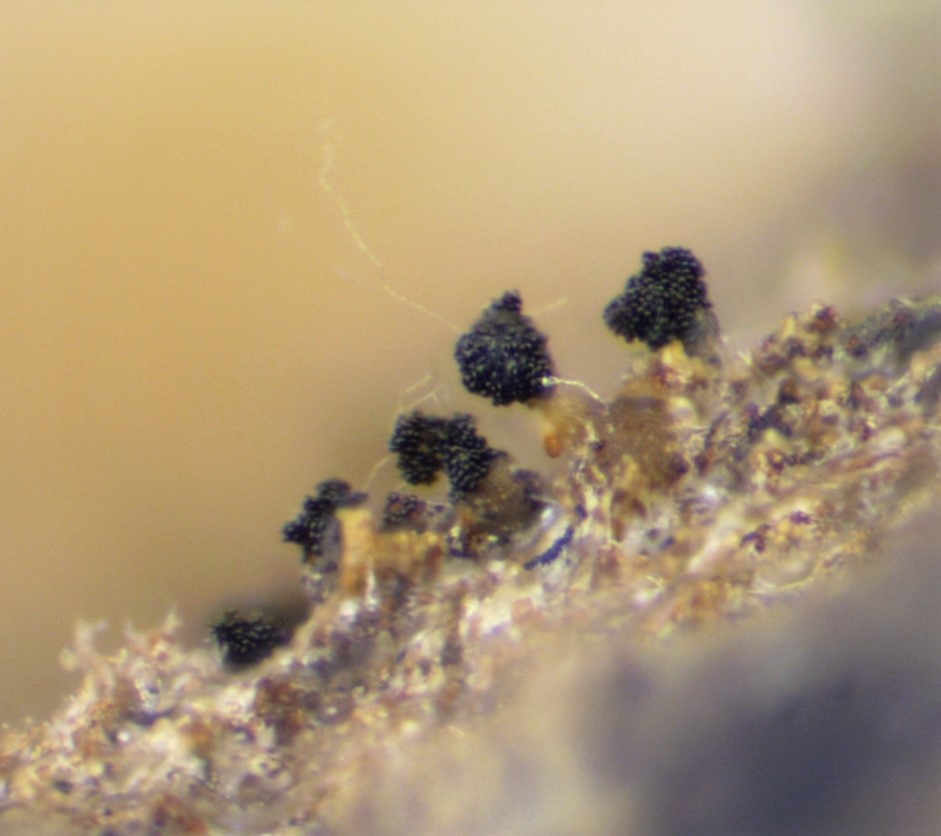 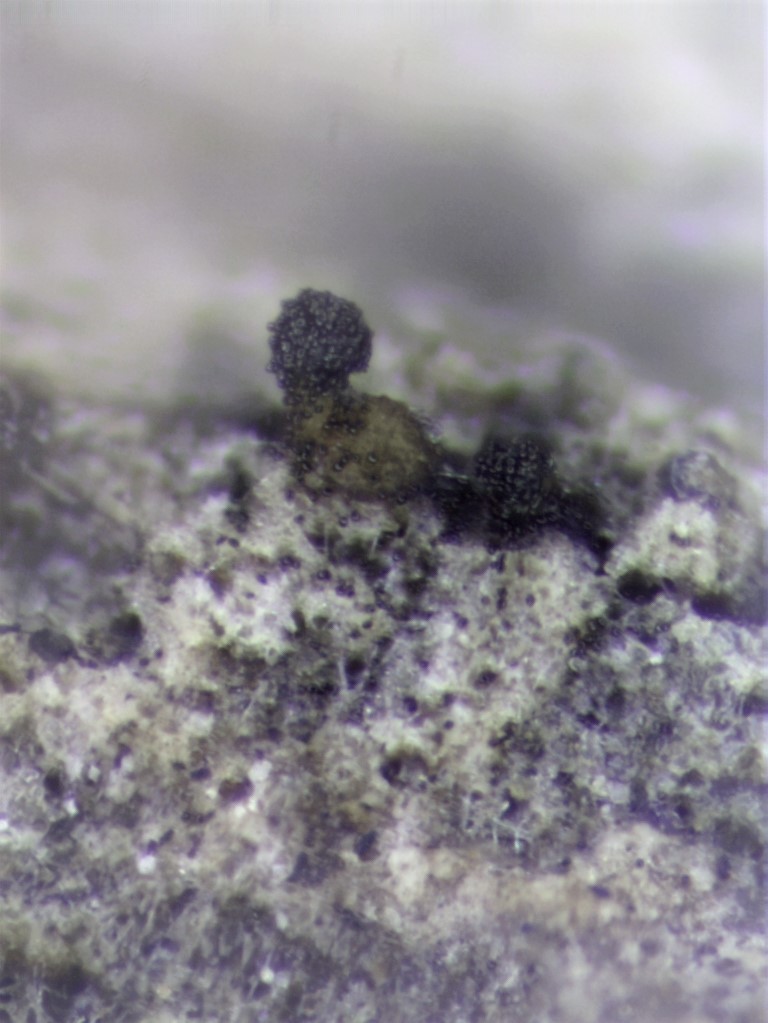 While I was searching for these, I also caught sight of what I assume are infant versions of slime mold beetles. I include it here in support of the idea that these were mature specimens because I believe you can see the beetles inadvertently carrying around the small spore bearing structures on their rear ends as they - I suppose eat? - the white filament?!

Then I stuck these under my compound scope - which is ironically a truly introductory tool, under $150, and capable only of accurately judging general shapes, structures and measuring microscopic size. Color and minute structures are not available - and I know that may sink the ship as far as identification is concerned. Time to be honest - I don't even know whether the things I measured above were the spores, or sacs holding more than one spore. I don't even understand whether they the same blackberry bits that can see in the less zoomed in shots above. I think I see capillitium in the above image, but I have no idea whether there are visible lime deposits, because the book I'm using is in black and white and primarily handdrawn images. The few microscopic photos are extremely blurry.

Long and short of it, I need help. Or even a hint :). But definitely I need to know where I can get a better, more comprehensive written resource to use in identifying these things as they grow. I have four more moist chambers coming along and now I'm concerned by how totally adrift I am.

Having said all that - I could not be happier to be a member of this group - and actually, the last several hours exploring this tiny piece of wood in insane detail have been some of the most exciting hours ever. Multiple times during this process I've stared agape at my computer screen amazed at some tiny, impossible thing I never could have guessed existed.

I hope this is of interest to folks - whether any answers await me - and look forward to any and all guidance. If I've left out pertinent information, just let me know. I'm sure I have - the only question is whether I am in possession of that information, or whether I myself am unable to procure it from my subject.  If it's the former, I will provide it upon request, post haste. If it's the latter, I will try to get it next time.

It's always been thought that slime mould species are cosmopolitan, although there has probably not been enough research in some places (especially Australia) to confirm this. I know a couple of species, including Trichia brimsiorum and Alwisia lloydiae (type locality is my study site) have so far only been found in Australia.

I haven't ever persisted with moist chambers and have never seen P. polycephalum but I reckon Jan-Maarten is right about your 'berries'. I have read that species that appear in moist chambers are often not true to type.  There are no smaller species in the Physarales that fit the description. And of course in the field there's heaps of variation in size, shape etc among fruiting bodies - even those arising from the same plasmodium. It makes identification pretty challenging sometimes.

My 'berries' fall within the Audubon range.. have you tried mycobank or encyclopedia of life? -> http://www.eol.org/pages/16850/overview

They do look a lot like P.physarum. Actually I meant to update this last night with a mention of the species cause I found it while looking through the Audubon guide for North American fungi.

But the problem is - at least according to the book I have - the scale seems to be all off. The Audubon describes the fruiting body as being 1.5-3mm wide and 1-5mm high. These guys were all way below 1mm in all their dimensions.

Do you know whether that size range is accurate for the species? Or maybe there's a smaller species in the same genus?

Hi David, your blackberries look a lot like they might be fruiting bodies of Polycephalum Physarum, workhorse of slime mold science. I'm including a (somewhat blurry, sorry about that) picture I took of similar structures in my terrarium (the Netherlands). Thanks for taking a look - I thought they might be fungus as well - I just don't have any framework for something that fits this bill. I'll peruse some of my more comprehensive fungal guides anyways.

Also, thanks for the links - I bookmarked the top two. I know that many slime molds are fairly cosmopolitan - do you think there would be a lot of species overlap between Tasmania and NYC?

The 'fuzz' that first appeared in your moist chamber is fungal growth and definitely not a plasmodium. I've had a quick look at Les Myxomycetes (French text by Poulain et al) and your 'blackberry' doesn't seem to fit any myxo photos so it might be a fungus. There's some information about moist chambers on this page:

My interest in myxos focuses on the fruiting body stages rather than culturing plasmodium. I have a website that you may find useful for identification; the Pdfs of the plates include the microscopics:

I have also published a book called "Where the slime mould creeps - the fascinating world of myxomycetes". It's available from the NHBS in the UK.