I experimented with four alternative substrates to replace the salty agar: 1. felt, thinking this would interfere with its creeping motion; 2. cardboard, which would dry it out; 3. Aluminum, interfering with some electrochemical process or other; and 4. rubber, for no clear reason whatsoever but I like symmetry. 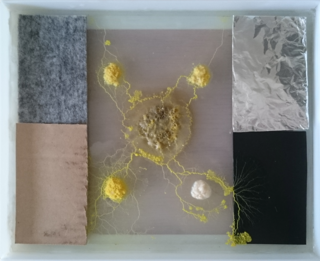 Initially, it was reluctant to crawl on the felt or aluminum, but had no problem with rubber or cardboard, although the cardboard indeed drained it quite a bit. Next, I extended the oatmeal it likes to eat onto the alternative substrates. 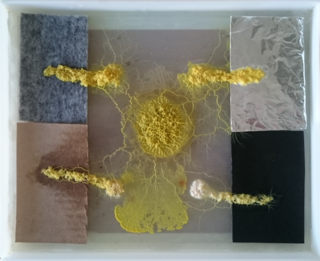 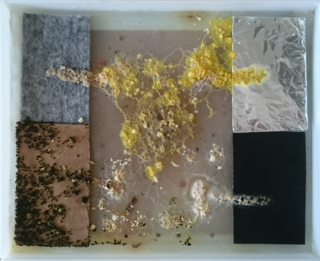 Ah, sporulation on the cardboard floor, probably initiated by drying out.. although in another experiment, drying it out by a slightly elevated temperature caused it to form a sclerotium, so there must be other factors at play too! Ultimately, the surface least explored was aluminum, so in the next container I am building, I will add a ring of aluminum to keep it contained. Here are some detail pictures of Andi on various substrates, the last picture shows salt burns caused by the earlier enclosure: 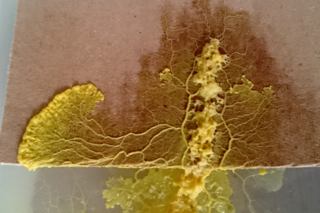 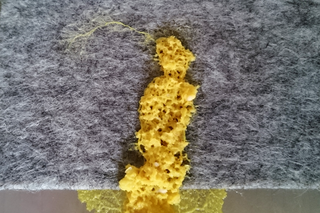 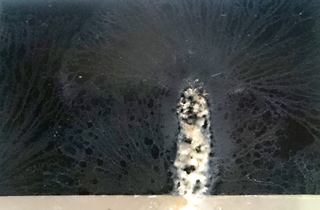 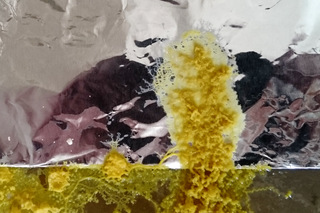 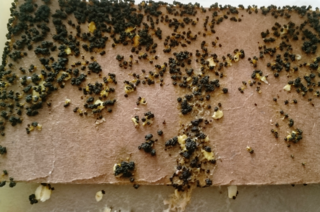 Thank you! The substrate in the middle is just 2% agar, with no added nutrients. It stays mostly clean, in my experience it is the oat husks that get moldy first. I 'change the sheet' every four/five days or so.

Hi @Jan-Maarten, thanks for sharing your experiments. I saw some other posts of yours as well: nice work!

I wonder what is the substrate in the middle of your box here? The Slime Mold seems to grow really well there. I've been trying with agar myself (prone to contamination) and just glas plates (seems to be too dry).