Hello! I received an email that suggested that "it’d be great if our newcomers could post up an intro and tell us something about what they’re doing with slime molds." I definitely joined around a year ago, but would still consider myself a new member since I didn't log in until this week. Personally, I haven't seen anything in the media that would spike interest in slime mold other than two recent news articles suggesting that the US replace their government with slime mold (which I wholeheartedly support).

I'm Sarah, and I'm a university student studying creative writing (and eventually education). I'm suddenly active because, well, I've been interested in slime mold since I was a kid and my mum took me to see slime mold cultures in her biology course at her university. I'm a writing student, and plan to write a longform creative non-fiction piece about slime mold, and the community behind it (since I recently realized that other people are interested in this besides me). That sounds super weird, but basically I'm trying to learn what I can to write a novel-- partly for a class, partly because I've been so interested in slime mold for so long and everyone always makes fun of me for it. Writing a book seemed like the logical choice. I'm about to order a slime mold culture kit in order to study it, so if anybody has any tips or tricks for keeping it happy, that would be greatly appreciated! :) Have a great day!

I was surprised too when I discovered there's such a large community interested in them.  I use them for science engagement - mostly talking to groups of school pupils ( 6 - 18) they're a wonderful gateway into talking about the limits of intelligence and what conscious experience really means.  Plus everyone gets to take one home!

Hi Ian! Thanks for the reply. I love that there's this community, and found it neat that it's not only scientists, makes me feel like I can study slime mold even though I'm not studying science. Science engagement-- that's really cool! Awesome that the kids get to take a slime mold home, too. How did you get into that?

It started as a cynical job protection exercise but it turned out I not only enjoyed it but I didn't suck at it either.  My actual job is microscopy lab manager but I persuaded work that  20% public engagement would be a good idea. Slime has taken over a bit - I wanted to do tardigrades and extremophiles at the fair but the head of faculty told me  "you're r the slime guy right?  You're doing slime,  kids like slime"

Ha! That's a good story- kids do like slime, I once had a birthday party that completely focused on making balls of slime to take home (not quite slime mold, but still not a shock that I've ended up here). Mazie- have you actually had it solve a maze? I keep watching time lapse maze-solving videos.

I make mazes whenever I've got a session to run - and a few maps.  For schools seasons I give the pupils a choice of mazes or food choice plates to take home.  Mazie's a strain I bred up myself to avoid any issues with 'copyright'  on the commercial strains.  'She'  was basically the better behaved colony - some of the others either don't revive as well or show way too much tendency to escape.

That's so cool! What sort of maps? And how did you breed a strain? Sorry to bombard with questions- I'm not coming at this with any sort of science background as my entire degree is in the arts, but find it too interesting not to try to study.

That's so interesting- wonder why nobody studied them before... The more I look, the more there seems to be a bit of a cult following with slimes. I'll never have access to a professional lab as I haven't even taken science courses since what I'm pretty sure was actually called Biology 101 in my first year of uni, so I'm going to have to figure things out best I can.

To breed - get spores, this just means leaving a slime in the light for a few days. The spores have to dry for a few weeks, then when you add water they hatch into amoebae. I feed mine by just putting an oat in the water - it feeds bacteria that then feed the amoebae. I put the culture onto blotting paper, leave it in the dark and add a oat and a bit of water every few weeks. Eventually you get a tiny yellow blob or two - feed that a oat and carefully lift it out and you'll find it grows into a new slime. 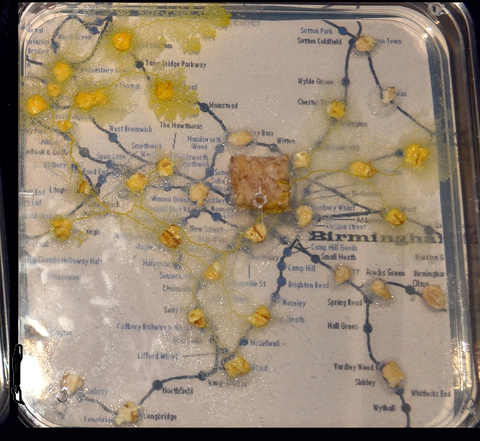 Ooh, that makes sense, super cool! Awesome map, that looks like it worked out super well. I'll have to try that out!