Otherwise known as the boredom assay. I suspect some of the slime strains are more prone to contamination than others. I'm trying trays with 25 0.5g circles of oats all inoculated with two slime oats. I'm going to just score them twice a day on growth rate, visible mould growth and nasty smell.

Eight trays on go like this - let's see what happens

Well, it seems to work as an assay but it has drawbacks. Firstly - it takes ages to set up, eight trays took four hours.  secondly, it's disgusting. There's definitely variation - 3 days was enough as the slime was just starting to move away from the spots. Some strains had taken over all the spots with only a few patches of pin mould that didn't bother them, a few had more extensive mould but were also fine. Yeasty/smelly spots were abandoned by the slime. One strain - as I'd suspected really struggled with the majority of spots going down. 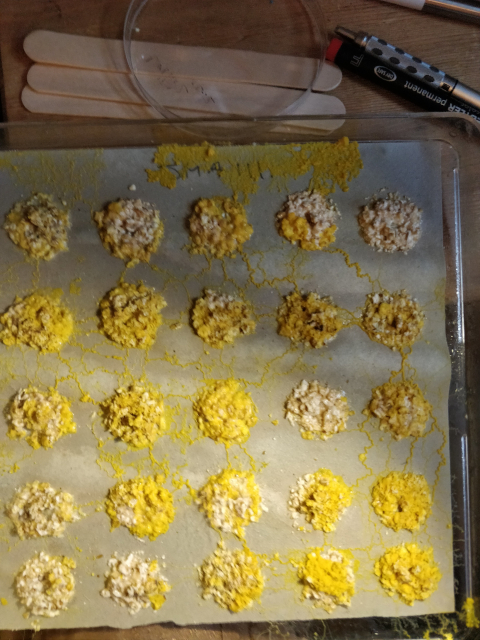 The one below actually made me gag when I opened it to photograph. 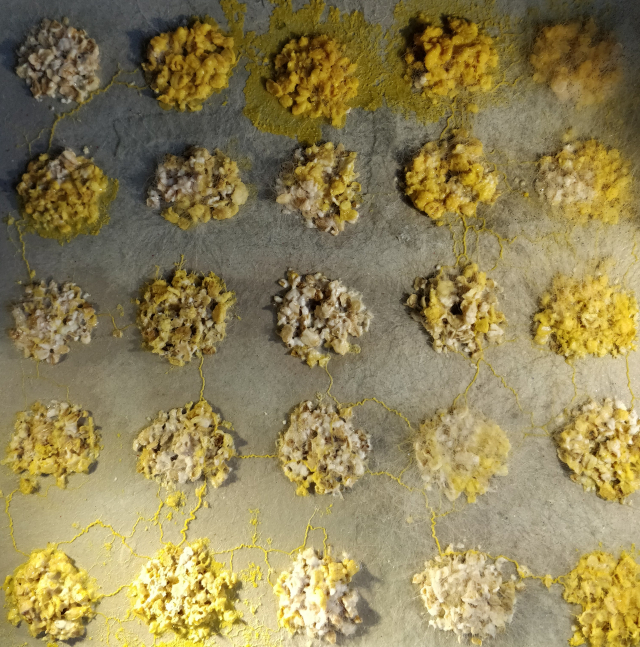 and the control - I didn't even open this one. 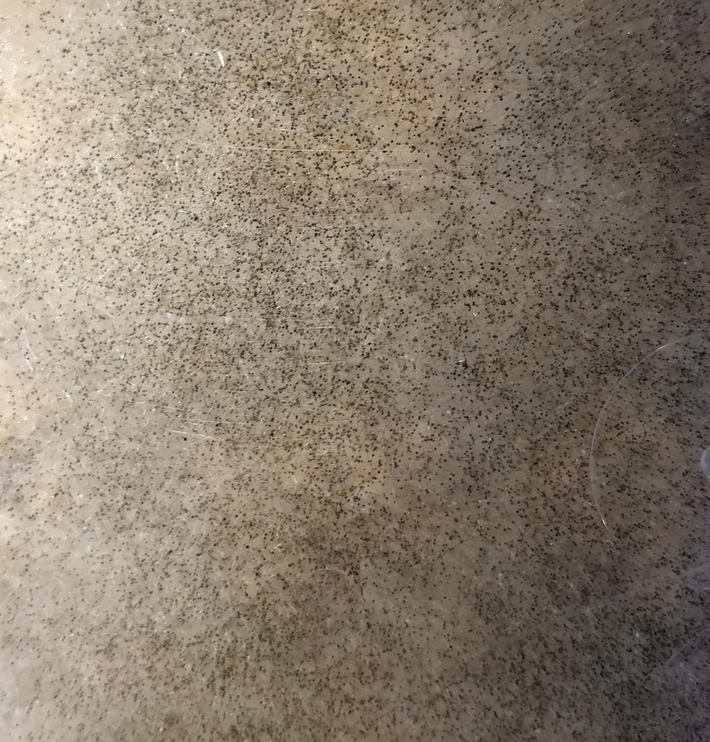 So - it works but to turn this into a formal study, do I need repeats, does one tray count as 25 repeats or do I need more? I'm thinking if I run a second on each strain and the results are comparable, that'll do, if it's very different i'll swear and do more. Any thoughts?

What are we looking for>?

I'm sort of guessing you are doing something similar to the below? 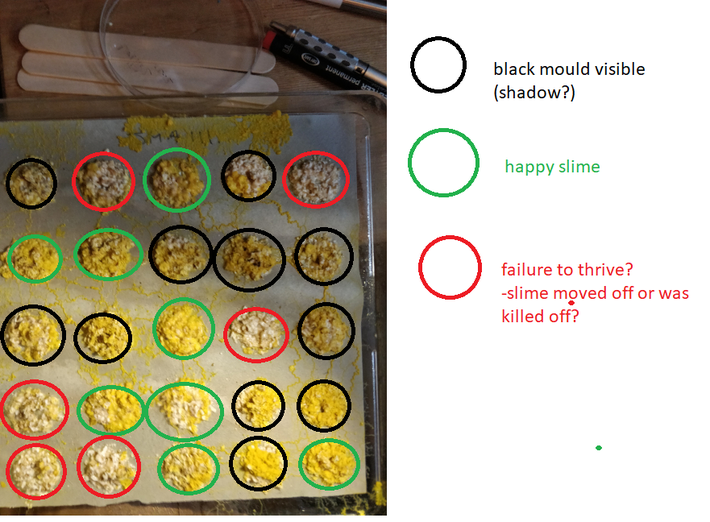 Pretty much, the ideal would be to time lapse it but the camera's running 24/7 as it is and I couldn't film all the plates. It's possible to tell by appearance which blobs have been digested and abandoned and which went down with yeast/bacteria ( here after just called stench ). I have a suspicion that the stench is actually carried by the physarum - next stage I suppose is to try sterilised food.

I've 24 physarum and the same of Mandy to assay for this - I figure contamination tolerance is a good trait if you're trying to selectively breed, I know which ones I definitely don't want - which ironically means I have to breed from them, raising an 'unfit' strain as well as a 'fit' strain kind of clinches the evidence that it's possible.

Maintaining the weak strains is a massive pain in the bum - getting enough plasmodia to dry down isn't easier and the failures are not pleasant to be around. The weak ones are also pale - does that pigment have a role in fending off infection, is it a gene linkage or just coincidence? I see much time spent with solvents, evaporating basins and slime...

A control plate of oats without spores might be a useful comparator too.

In terms of breeding it makes me think of those plates for drug resistant bacteria testing. Start off with a slightly mouldy tray of oats, place spore in center, keep strains that extend the furthest into mould/bloom territory.  Might even be a source of novel antibiotics.

weaker slimes are paler - could they just be thinner? How would you even measure that? Freeze it and cut a slice through the slime and plate, turn it on it's side and look at it in a microscope?

Do you have access to a microscope? Is the color held in sub cell structures (I'm thinking of chloroplasts) or is it loose chemicals?

Plain oats is the lower image - rampant pin mould which makes me think the stench might be piggybacking on the slime.

I like the idea of letting it start to rot but this assay is a pain,  I wonder, If I made a long row of oat flakes,  inoculated one end, slime is going to crawl along, the oats at the far end are going to be busy going rotten.  How far the slime gets - or rather, when it stops advancing is going to be a pretty good indicator of how good it is at dealing with infection.

Transferring the stench from an infected spot to a new one, extracting slime juice and applying it to oats.. There's a lot of fun stuff to try if anyone fancies collaborating.  It could be as simple as the sick ones don't secrete as much protease - that's fiddly but testable at home.

On the thickness front, they don't look thinner by eye, once I'm back in the lab I can slap a few on the confocal and measure it directly ( one week to go !).

The pigments are in the cytoplasm but not in discreet organelles, they're important to the slime's light sensing, some of them, polycephalins are antenna pigments - fixed to proteins that respond to light.

The other assay to do would be extracting pigment and looking at extinction coefficients  - how much light it absorbs at different wavelengths - easy to do but not until I have access to a spectrophotometer, my lab doesn't have one and I'm not allowed into other areas under covid rules. In a couple of months though

There's a load of stuff here that could be looked at, if anyone fancies jumping in I'd gladly collaborate - proper research, careful protocols, weighing stuff - I'd post out strains, consumables etc  I think there's a really good shot at a full on research paper here - maybe not Nature standard but no where shabby.

Looks really cool! Haven't been on in a few weeks but looks like lots of interesting things have happened here.