i·m new here and i·m excited to join this community .

at some point i would love

to get a sample of physerum polycephalum .

over the past five years

i got increasingly into studying molds , fungi , and lichens .

i made some avant garde technologies

involving bio-chips , terraria , and a giant glass tank filled with all manner of things , which i one day ran a 6V lantern battery through and dubbed The Bioreactor .

the experiment got so famous that

Magic: the Gathering made a card about it ,

part of the experiment

made of chia gel , graphite , and lichen

hooked up to a 9V portable battery .

i had set up the terrarium such that

there was an old SD Card buried in the sand .

slime mold connected the bio-chip to the card

could have allowed it

what would have appeared as digital noise . and here·s The Reality Chip 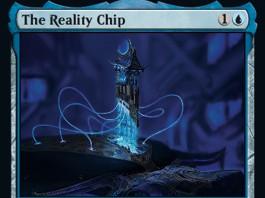 note the round AI node in the top left corner ,

the blue scintillation is glass dust in sand ,

the Bio-Chip and SD Card at the bottom ,

with ever-so-fine tendrils seeking out ,

and two staring giants in the background ,

i just moved into a new apartment

in a new city

with which to start

a whole town of experiments .

Cool! Did you know you can steer them around with 5v dc? Pm me and I'll get some slimes on the way

do you have any recommendations on fun tests to run ka .

Permalink Reply by Skadi on March 18, 2022 at 23:03
i·ve got a solid tank now , and i even found the legs to a table . right now i·m just waiting for cheque day so i can go to the hardware store and start building .

Permalink Reply by Skadi on April 1, 2022 at 8:48
Well , i·ve finished building the table to hold the terarrium . There·s a big glass tank on top of a coffee table with two large plastic pallets as its surface .

How do i post pictures in the forum ? . On my previous post i could post pictures tho there doesn·t seem to still be an attach button? .

Permalink Reply by Skadi on April 16, 2022 at 17:25
friendly reminder to all those INT crews out there that you could in fact just politely ask on this forum right here

Permalink Reply by Skadi on April 28, 2022 at 5:19
i·m super excited
i·m going to the forest next week with a friend
i can·t wait to take lots of samples

Permalink Reply by Skadi on May 2, 2022 at 4:44
there is definitely a minimum of one (1) slime in that container . damn thing·s crept halfway up the inside of the glass case . how does a slime climb glass ka . some scientists say ,

Permalink Reply by Skadi on May 10, 2022 at 5:06
exhaling O2
inside the Terrarium
the foliose burns