For anyone in London next weekend, I am giving a talk and running a workshop on Physarum polycephalum.

Full info and booking at: https://www.societyofbiology.org/events?event_id=313

The talk will introduce the biology and diverse areas of research working with Physarum as a model organism, and I will talk about my studio practice (studies and…

If you are in Rotterdam on Friday 27 September we are running an experiment to see if humans can follow a few simple behavioural rules of the plasmodial slime mould in order to communicate, navigate and cooperate.

We are inviting people to participant and become a human slime mould super-cell, or come along to observe what happens.

Coming up in Rotterdam Sept-Jan...
slimoco exhibits a three part interactive installation 'Being Slime Mould: observation, simulation, enactment', as part of 'BIODESIGN
On the Cross-Pollination of Nature, Science and Creativity' at New Institute, Rotterdam.…

REVIEW 'Two Beings Collaborate on Art, One a Human, Another a Slime Mold'

Review by Allison Meier, of Physarum work recently on show as part of Cut/Paste/Grow: BioArt in Brooklyn, curated by GenSapce, William Myers and…

I have found that the use of EVM (Eulerian Video Magnification) can improve looks and shape of physarum videos. I therefore give an URL of a split screen EVM which I have recently done.

I recently received two nice and healthy petri dishes of Physarum from the USA to work with, but after a few days, and almost overnight, they changed from lively succulent plasmodium specimens to sclerotium, and have been totally static for days. I have rehoused parts of them in fresh agar filled petri dishes but they are also inactive. I even added a drop of purified water to see if they were in need of rehydration, but still no change. I am rather traumatised that I have not looked after…

Check out the trailer for a feature length slime mould film in production, made by slimoco members Tim Grabham and Jasper Sharp, and featuring Simon Park and …

Check out this BBC4 documentary on the science of decay. There's a decent section on slime moulds, including Bruce Ing foraging for them in the woods, the Tokyo transport network experiment and Soichiro Tsuda's physarum controlled robot. Some gorgeous time lapse's too.

Catch it on iPlayer for another 5 days...

Just as I'm about to do a bit of work with the slime mould it decides to get all reproductive on me. Am I normal? 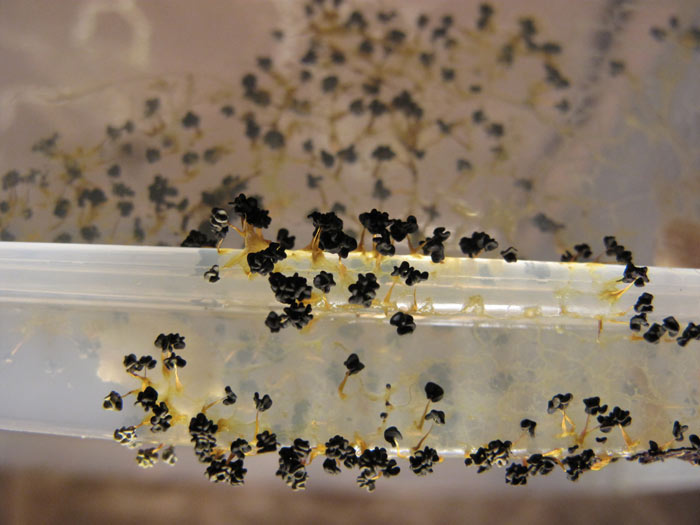 Had a great outing today to the MA Art & Science @ CSM, London. Thanks for having me. Please add photos of your Physarum polycephalum experiments here and let us know if they do anything interesting or unusual. The collective animation we made during the day is on here and YouTube.

Thanks again for a great day.

I took some Physarum to the Margate Photo Festival last weekend and invited visitors to feed it with a variety of substances to establish likes and dislikes. Obvious liking for oats and rice, pasta and flour; distinct dislike for alka seltzer, ibuprofen and bicarbinate of soda; but I'm not too sure about tobacco and chilli powder (it seemed to investigate seriously but not engulf). Worth further investigation, with a closer position...

Thanks to all those who fed the slime…

On 22 March 2011 I am giving a talk about my work with Physarum to a group of artists, designers and biologists at GenSpace, New York's Community Laboratory. http://genspace.org/

We will be looking at the range of research currently being done with slime moulds, my experiments and attempts to collaborate with the intelligent organism and will be making slime mould art.

For the past two days I've been talking to a wide variety of people about the wonderful attributes of physarum polycephalum; their beautiful growth patterns, my experiments, their attributed intelligence and suggested memory and primitive pulse.

Over 50 people (young and old, but mostly young) took home their own pet slime mould: they each made a felt design in a petri dish, decorated it with oats and oat paste, and lastly inoculated it with slime mould. In the days to come the slime… Continue

My experiments with Physarum polycephalum started in 2008, following an introduction by microbiologist and slime mould enthusiast, Simon Park. I had worked creatively with biological material before (skin organisms, bacteria, seeds) and was initially interested in the idea of a single cell organism working in an organised and cooperative manner. Early experiments offered my pet Physarum different food sources and environmental conditions, and set tasks to test its ability to locate food and… Continue