I work with somatic research in a poetic way and have found slime mould's properties to be a source of inspiration in this practice. I did a residency in Japan where mould is plentiful due to the humid and warm climate. The moulds and fungi became my collaborators and so I'm wishing to continue this collaboration with the non-human.

I've seen slime in 2015, but just now realize how I want to collaborate with it!. I'm a new media artist and been working with magnetic fluids and starch and what not to generate forms through the use of circuits, magnets, vibes and human interactions. I can't wait to use the slime to do just that but on cloth... I hope Ian, you can send some my mail, since I can't get it here in Israel. I'll be posting my experiments once we and the little yellow fellows finally meet.

I want to know more about the Physarum polycephalum. But I can't find anything about them on the Internet.

Is there anybody who know more about the Physarum polycephalum? Please share the website relate with it for me.

Hello ! I finished my experiments with Physarum polycephalum, and I share the results in a blog : http://blob.ytterbium.eu/ , if you want to see my group's work for 6 monthes. We made videos and photos, but the blog is in french...

I want to ask you something about Physarum polycephalum.

Hi. I am new member of slimoco. I'm going to start the small project about Physarum polycephalum.

So  I want to ask you something.

(I am not that good at English. So please understand my messy post.)

First of the project, I'm going to observe the behavior of  Physarum polycephalum.

And then analyze that to make a algorithm. Through that algorithm, I will make a code.

Q 1. To do that, maybe I must have the Physarum polycephalum.… I soaked rice in salt / bleach water, then autoclaved it thinking this would act as a barrier but the slime mould still went for it. (I didn't feed it for 2 days maybe it was desperate) The brown long stuff is valerian root, I read this thing that they go crazy for it. In other Petri dishes it did crazy for it, not here though...…

I am new to the collective and merely a mostly mycology, but very recently myxomycetes, hobbyist. I made a very light hobby for a long while of identifying mushrooms, but in the last six months I've started to try and dive a little deeper into things. That's how I discovered myxomycetes and slime molds - found my first M.vesparium while looking inexplicably closely at a random log and it piqued my interest. Now, I've read a VERY introductory book, - The…

My slime mold housemate and I did a Christmas special, for your entertainment. Happy holidays!

Using an oatmeal-laden Ouija board, I am having a very slow conversation with our live-in slime mold Andi. I started a record of these back and forths on Medium. Anyone interested can join the conversation, here's how!…

When the first sorus opened and Skoni’s cells spread out to make all that there is or ever will be, her sora floated down on Theia and merged to form five children. Her soral shell fell into the Skonisphere and became Skoni’s Heart so that her children would be… Continue

When I started to work with P. Polycephalum I build an elevated, acrylate enclosure that allowed me to slip pieces of paper underneath to help me create designs of oatmeal, along the lines of the famous Tokyo subway experiment. It looked like this: 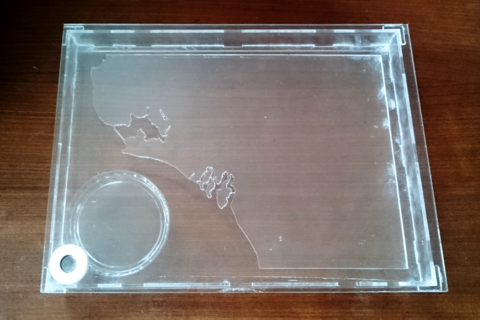 I experimented with four alternative substrates to replace the salty agar: 1. felt, thinking this would interfere with its creeping motion; 2.…

I've been looking for a way to rear physarum from spores without resorting to bacterial lawns and needing autoclaves etc.

I've only done a couple of trials but this method seems to work ok, it does require a bit of patience.

I used petri dishes and filter paper but any container and a bit of tissue should work. Can we assume that a blob is part of flatland inhabitants as presented in the fiml :